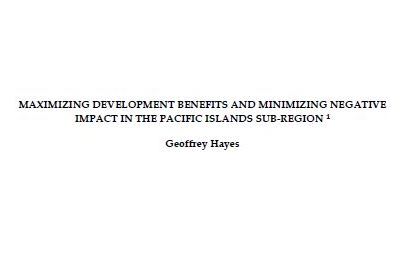 This paper reviews recent pattens of international migration from Pacific Island countries and concludes that migration has generally increased over the past decade but patterns vary between countries and sub-regions. Some countries not previously involved in temporary labour migration are now sending workers abroad.

Transnational communities have continued to grow in the main destination countries but the proportion of the total ethnic community that is overseas born is also increasing. Similarly, migrant remittances have increased to high levels in and arecrucial to the maintenance of consumption levels and social welfare in several countries.

Migrant remittances generally reduce the proportion of the population in poverty, but the future sustainability of remittance flows is in doubt in the smaller Pacific countries as the commitment of second-generation migrants to the "home" community weakens. The loss of human capital resulting from the emigration of skilled workers is a concern in some countries. National sustainable development strategies do not pay sufficient attention to the issue of international migration and there is a need for institutional strengthening to address this.

There is also a need to develop a research network and strategy for the region to assist planners to better understand the implications of migration patterns and to formulate appropriate policy responses. Policy dialogue among Pacific countries would assist planners to identify those policies that would assist countries to gain benefits from the migration process and mitigate the costs.