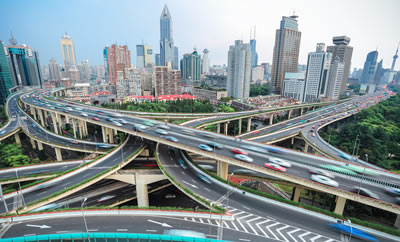 The bus, train, ferry or bike - how do you commute to work? Whether we live in urban jungles or sleepy suburbs, we all take part in a vast network of mobility twice a day. In the midst of a hectic rush hour or a missed train, you may find yourself longing for a better way to get where you need to be. ESCAP has developed a holistic and visual tool that analyzes the status of a city’s transport into a web of traffic. The tool, called the Sustainable Urban Transport Index (SUTI), facilitates improvements in urban transport systems, and promotes informed policymaking on transportation.

How does it work?

The data for these indicators is readily available in cities, provided some effort is taken to compile it. Facilitated by a data collection guideline and a SUTI Excel data sheet, data from all ten indicators will calculate a city’s SUTI. The data will then generate a spider diagram that represents an overview of the city’s overall state of urban transport and performance of each indicator.

For example, using the SUTI result diagram, a city can consider if there are areas where it would like to focus more attention on in the future, or areas where the data should be examined more closely. Repeating the exercise regularly will allow a city to track its progress to improve the urban transport system over time.

Analyzing SUTI for several cities also allows for comparison and ranking of performance across cities in a standardized way. Overlaying spider diagrams for multiple cities onto a single diagram renders a quick, visual comparison for individual indicators. An indicator’s position between the center and the edge of the diagram represents progress for that specific indicator, with the edge as the ideal score. Thus, based on where an indicator lies, relative to the edge of the diagram, allows the viewer to simultaneously assess multiple cities’ indicators on air quality, for example.

What are the outcomes?

Pilot applications of SUTI were completed in four Asian cities – Colombo, Greater Jakarta, Hanoi and Kathmandu. These pilot cities were able to collect and analyze the data in a short span of time.

First, the framework produced a visual model that can be easily understood and helps policy makers to make evidence-based decisions. The pilot cities are already using the results of SUTI analysis. The cities and countries also demonstrated the usefulness of SUTI in analyzing transport conditions, planning future transport system improvements, and achieving SDG target 11.2. For example, Kathmandu is addressing gaps in pedestrian infrastructure and facilities.

ESCAP has been organizing capacity-building activities for cities and countries in the Asia-Pacific region to improve urban mobility, the application of SUTI, urban data collection, and sharing of best practices and experiences. Participants at a capacity-building workshop in Colombo in October 2017 shared results and discussed ways to improve urban public transport systems across countries. Additional regional workshops were organized in Kathmandu, Jakarta, and Colombo in 2016 and 2017. SUTI was also presented at the World Urban Forum 2018 held in Kuala Lumpur. Currently, the application of SUTI is progressing in six more cities: Bandung, Dhaka, Ho Chi Minh City, Surabaya, Surat and Suva.

The periodic assessment of urban transport systems using SUTI every two years can help track the progress on achievement of SDG 11.2 on urban mobility. Given the progress and its use in the Asia-Pacific region, scaling up SUTI could make a global impact in both practical improvements and evidence-based policy making. ESCAP stands ready to disseminate SUTI and its application, support cities and countries to collect and analyze urban transport data to make commutes better for all.